Groove Of The Week #38: Esperanza Spalding – ‘Funk The Fear’

Tom Kenrick
1 Comment on Groove Of The Week #38: Esperanza Spalding – ‘Funk The Fear’ 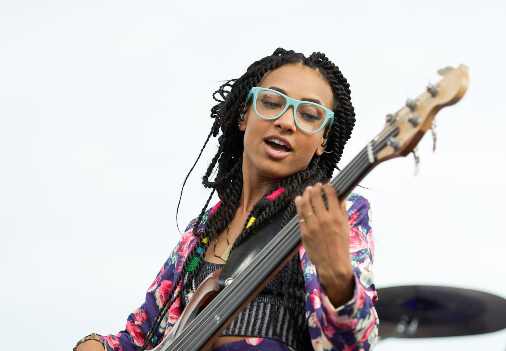 Esperanza’s Chromatic Odyssey – Getting In The Festive Spirit

Here’s a funky finger-twister from one of my favourite bassists, Esperanza Spalding:

If you take a look at the dots you’ll notice that it contains all 12 pitches from the chromatic scale:

Normally the preserve of modern classical composers, 12-tone serialism gets a modern reworking here thanks to Esperanza. Although some of the note choices are decidedly more ‘out there’ than most funk bass grooves, there are some elements that feature in numerous classic funk lines; the use of octave motifs and chromatic approaches with the percolating semiquaver rhythm lend an air of familiarity to an otherwise otherworldly groove.

‘Emily’s D+Evolution’ is packed full of interesting harmonic twists such as this, mixed with melodies that betray a pop sensibility and (of course) groove-laden bass playing.

These are a few of the hallmarks of the Christmas hits that rear their ugly heads at this time of year.

In previous years I’ve told myself that I’ll write them down to avoid having to re-learn them next Christmas, and having recently endured the horror of listening to them again I’ve finally started putting together charts for the usual Christmas suspects.

Here are the first two: