The Man Who Changed Everything – Melody, Not Chops – Confessions of a Gearaholic, Part 2

On September 21st 1987  John Francis Anthony Pastorius III left this world, dying as result of injuries inflicted by a nightclub bouncer. In the space of twelve years he had managed to completely revolutionise all aspects of the electric bass, redefining the role of the bassist and reinventing the instrument itself.

29 years have passed and we’re still trying to get our ears, fingers and brains around Jaco’s enormously influential body of work. His sonic trademarks can be heard in almost every contemporary bassist’s ‘bag of tricks’ and his superhuman performances on tracks like ‘Teen Town’, ‘Havona’ and ‘Port of Entry’ still provide huge technical challenges for those who are brave enough to attempt them. In the same way that Jimi Hendrix turned guitar playing on its head in the 1960s, Jaco took Leo Fender’s creation and pushed it to its limits. It’s rare that one player defines the sound of an instrument, but that’s what Jaco did with the fretless bass. In addition to his adventures with pliers and epoxy resin, Jaco popularised many ‘extended’ bass techniques including chords, harmonics (both natural and artificial) and the use of effects.

For me, one aspect of Jaco’s approach that seems the most relevant in ‘everyday’ musical situations is his fingerstyle funk playing. He took the influnce of classic R’n’B players including Jamerson, Jerry Jemmott and Tommy Cogbill and fused them with his assertive bridge pickup tone, resulting in something altogether new.

One of his first prominent recordings was Little Beaver’s ‘I Can Dig It Baby’ in 1974. He was 23:

What I find remarkable about this record is that with the space of a bar I know that it’s Jaco – he was already a fully-formed artist with a distinctive style by the time he reached his twenties.

If the initial groove to ‘I Can Dig It Baby’ seems familiar, here’s why:

‘Kuru’ from Jaco’s debut solo record has essentially the same groove, albeit at a more finger-destroying tempo.

Sticking with Jaco’s first album, the chorus groove of ‘Come On, Come Over’ contains another of Jaco’s most frequently used (and most copied) licks:

The constant barrage of semiquavers is daunting at first, and this was definitely not something that I got together in 15 minutes. For a long period of time I used ‘Come On, Come Over’ as my warmup for practising and to get my fingers moving before going onstage at gigs. Regular visitors to this blog will know that I prefer to use real musical examples to develop technique rather than finger permutation exercises or any other similar nonsense cooked up by people to sell books (or, these days, online courses).

The key (for me, at least) to executing the lick correctly is use of right hand raking (using the same finger to pluck consecutive strings when descending).

In the transcription of the chorus to ‘Come On, Come Over’ there are red brackets which indicate where I use the same finger to play several notes in succession: 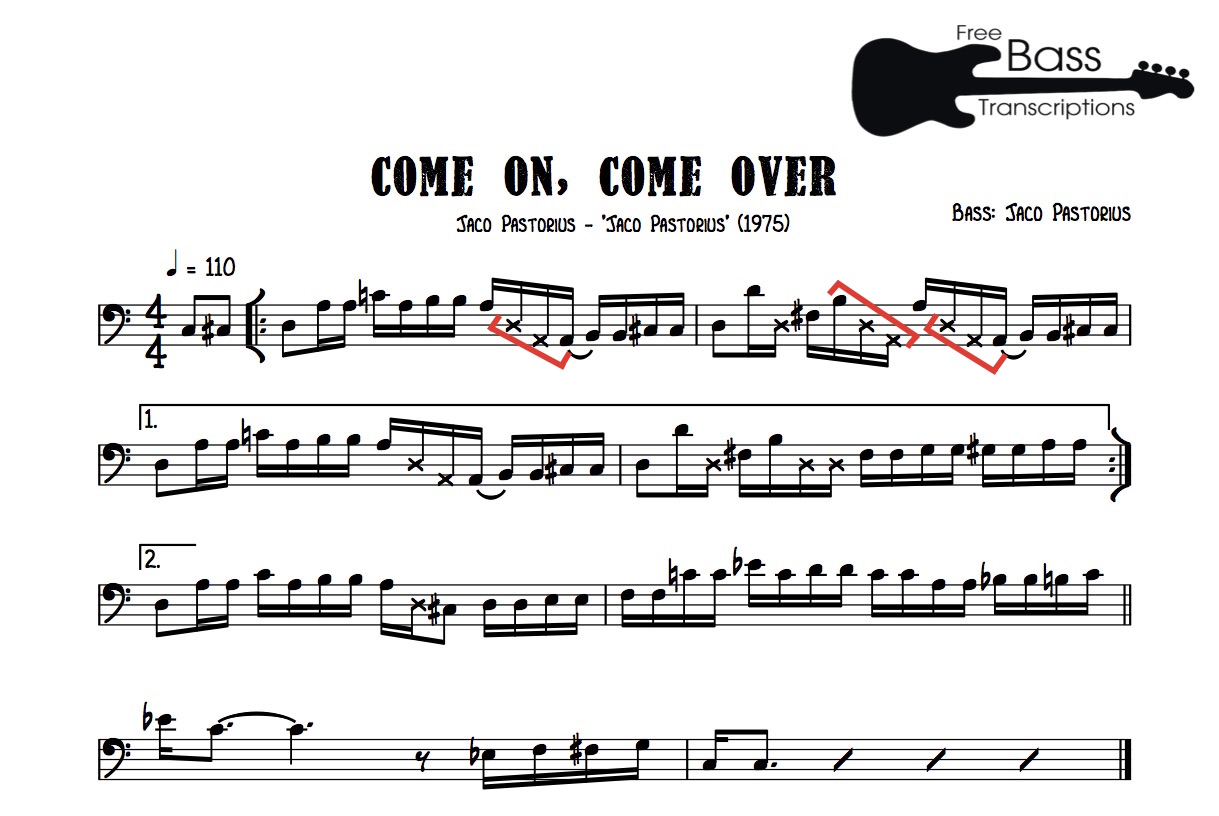 If you’re looking for a relatively easy way to get some Jaco into your playing then this is a good lick to start with – he used it everywhere; Weather Report’s ‘Barbary Coast’ is built almost entirely on this lick (played at a less demanding tempo):

My Path to Pastorius

My route to becoming a Jaco fanboy was not straightforward. I remember finding my Dad’s cassette tape of Weather Report’s ‘Heavy Weather’ shortly after taking up the bass at 14, but my ears weren’t ready for it and it swiftly fell out of favour, replaced by Jamiroquai and Rage Against The Machine. Some years later I went through the rite of passage of learning ‘Portrait Of Tracy’, but his playing didn’t consume me until much more recently.

In my last year of university I became very taken with Pat Metheny’s ‘Bright Size Life’ album (featuring Jaco and Bob Moses), which slowly led me to rediscover – and become obsessed by – Jaco’s contributions to the electric bass.

Just to be clear, this is not a ‘chops-based infatuation’ thing. Jaco’s impeccable touch on the instrument and overriding sense of melody are the things that I find truly inspiring – few players in the post-Jaco era can present high register lines in the same way that he did on ‘Cannonball‘ and ‘A Remark You Made‘.

In fact, I’ll take Joni Mitchell-era Jaco over most of his other output. If you’re not familiar with Joni’s ‘Hejira’ album then stop reading this immediately and remedy the situation.

It’s In The Ear, Not The Gear

At the end of 2015 I wrote a post about my worrying addiction to buying gear and made a bold proclamation that I was going to ban myself from buying any new gear in 2016. 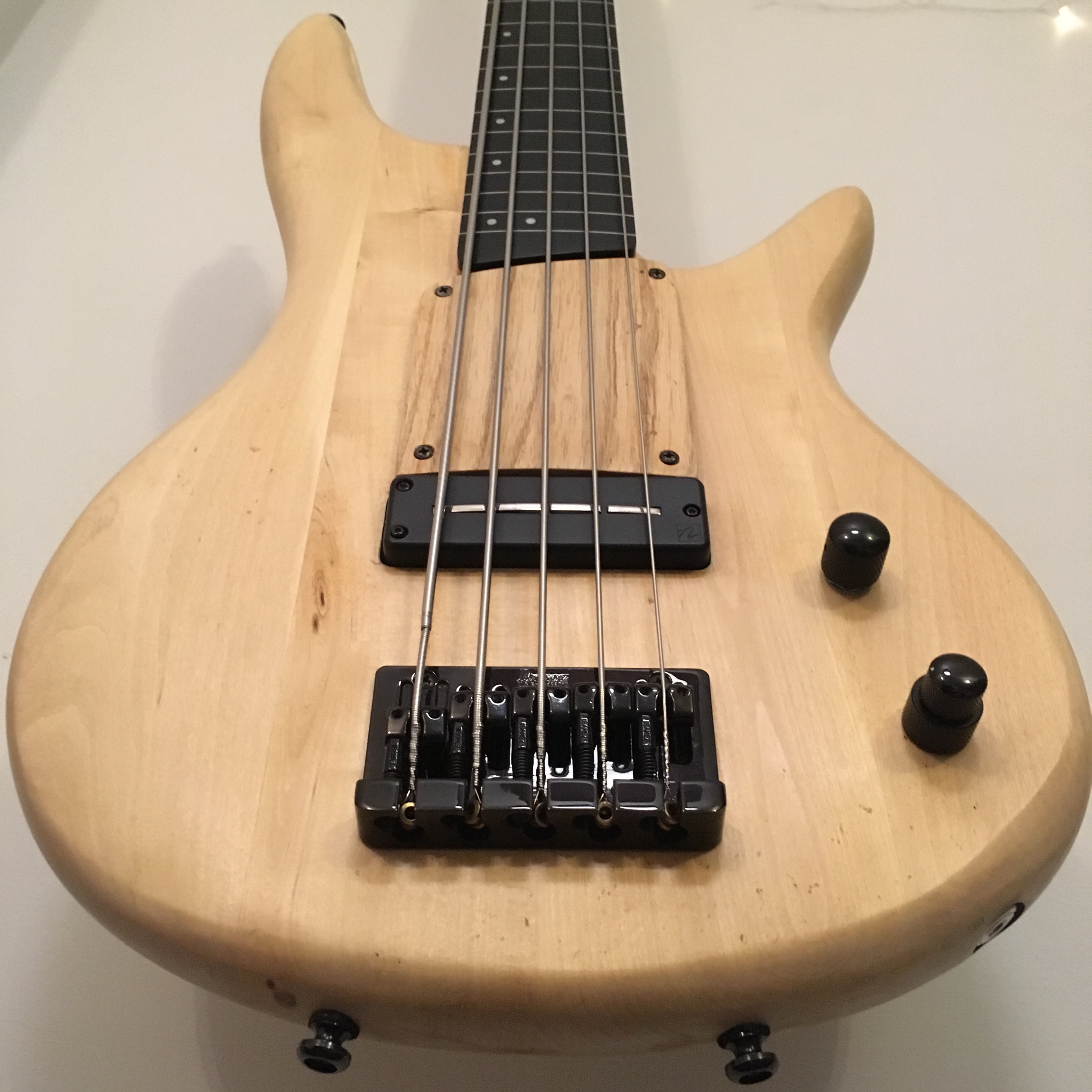 More on this next time.