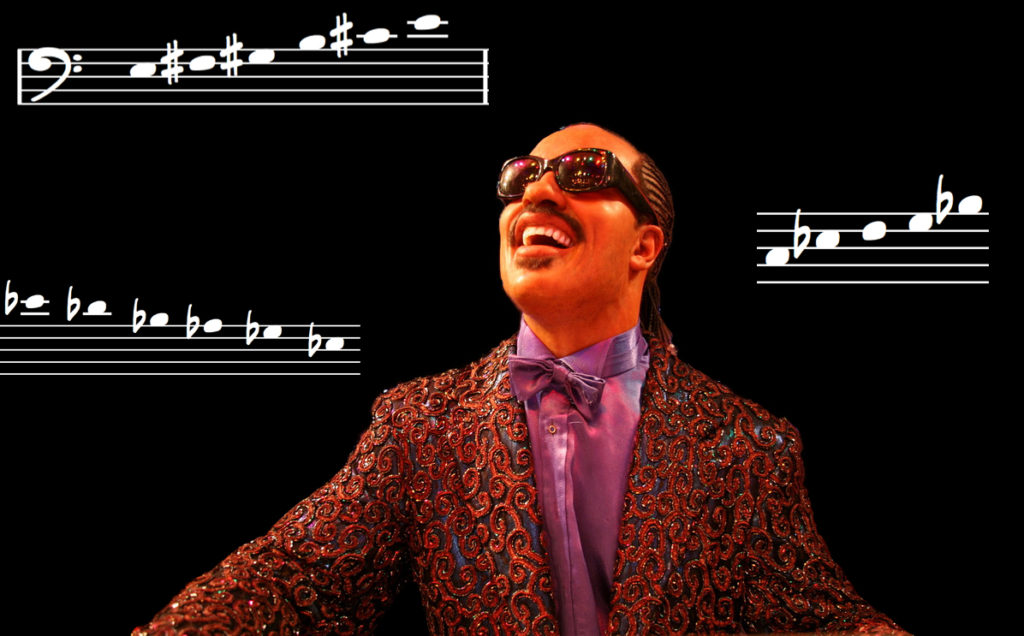 Stevie Wonder’s vast body of work is rightly revered by musicians (and, indeed, non-musicians…) for its harmonic and melodic invention; Stevie has managed to seamlessly weave jazz-based ideas, such as chromaticism, extended chords, and tritone substitution into his tunes and still sell vast numbers of records.

One of his definitive compositional devices is the use of pentatonic unison lines, which have provided instrumental hooks for some of his biggest hits. While some are deceptively simple, others might have you breaking into a sweat on a gig. Let’s look at some of Stevie’s best pentatonic lines, the musical concepts he uses to construct them and how to play them:

This is the shortest (and easiest) of Stevie’s pentatonic ideas, but the rhythmic placement of the line transforms a straightforward ascending E major pentatonic scale into a memorable hook. For an extra challenge, think about how many different fingerings could you come up with to play this:

I can almost hear readers groaning at the sight of this: “Surely he’s not going to try and teach us how to play ‘Superstition’?!”

Although this is one of the most-gigged songs ever, I doubt that many people faithfully reproduce every nuance of the original synth bass line (I know I don’t…). Nailing all of the legato phrasing and grace notes requires deft fretting hand articulation, as many moves that come naturally on a keyboard are rather awkward on a fretted instrument tuned in fourths. My preferred approach is (unsurprisingly) to use an octave pedal with 100% wet signal to maximise the ‘synthy’ quality of the part: 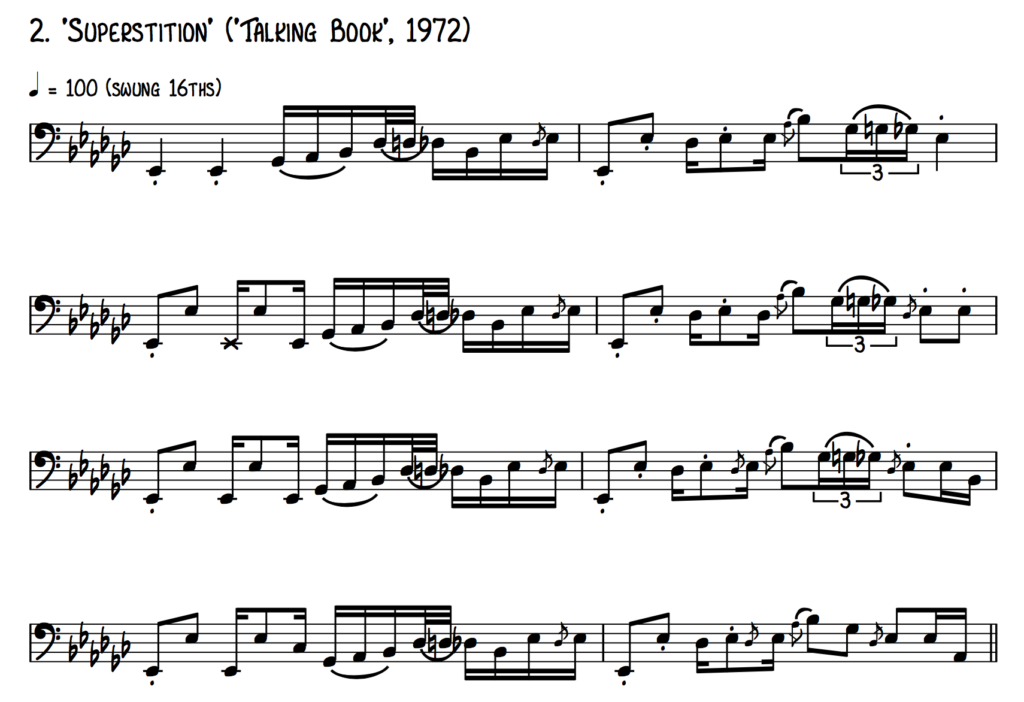 The underlying concept here is C minor pentatonic sequenced in 3-note groupings, which will be nothing new if you’ve ever sought out pentatonic scale exercises. The potential difficulty in this line is getting the position shifts right; I’ve marked in the fingerings that I use, but you might have another alternative that you prefer to use: 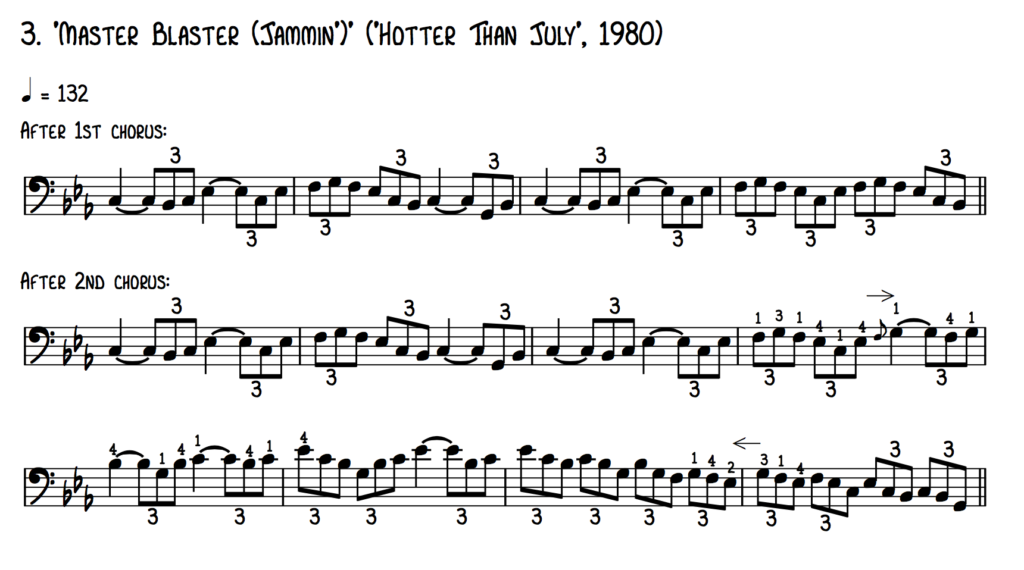 A fairly demanding exercise in playing the B major pentatonic scale (with frequent additions of the minor 3rd as a passing note) all over the fretboard, ‘Sir Duke’ is a classic example of what I’d term ‘bass Chinese Whispers’, where gigging a song for many years without referencing the original recording results in some considerable approximations of the actual part. I find myself playing the 8va section of the line in the lower octave and putting in hammer-ons wherever possible: 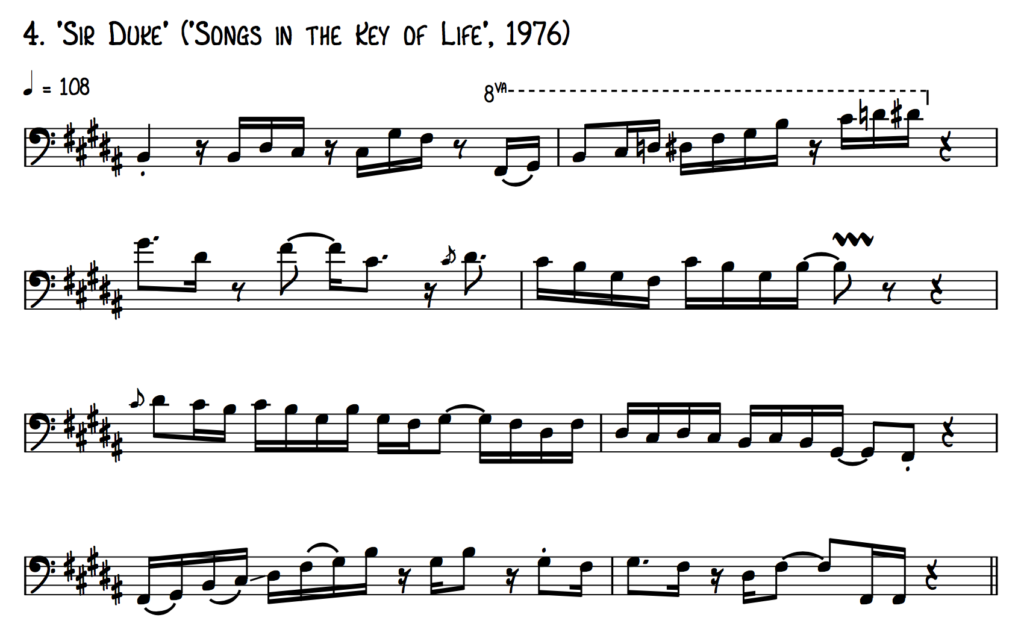 I also tend to mutate the last line somewhat, playing it more like the horn line on the Natural Wonder live version (my ears can’t decide if Nate Watts does this, too). Attempting to write this out resulted in the following triplet horror, which is easy to hear but a nightmare to read:

This one still causes me to panic somewhat, because 16th-note pentatonic sequences at 114bpm are near my upper limit and this one sounds very vague on a gig unless I’ve been practising it regularly. This line is a great example of how rhythmic displacement of a simple pentatonic sequence (B major pentatonic in 4-note groupings) can have great results: