Taking the Sting out of Odd-Meter Playing

For many of us, the very phrase ‘odd-meter’ brings us out in a cold sweat. Chances are that unless you’ve had a very eclectic musical upbringing then you’re most comfortable…

For many of us, the very phrase ‘odd-meter’ brings us out in a cold sweat. Chances are that unless you’ve had a very eclectic musical upbringing then you’re most comfortable in 4/4 time and anything that involves stuffing more beats into a bar is rather stressful. The matter is complicated by the fact that opportunities to practise your odd-meter groove skills are heavily biased towards prog rock, technical metal and modern jazz; not the most accessible genres by a long way.

But there are bright spots to be found in far more commercial territory: Sting’s 10 million-selling, triple Grammy-winning Ten Summoner’s Tales (1993) shows the former Police frontman stretching his songwriting skills to incorporate advanced harmonic and rhythmic concepts within the confines of a mainstream pop record and includes a number of odd-meter excursions.

Here are a few of my favourite moments that will provide plenty of practice material for odd-time playing that isn’t ‘Take Five’:

Further proof that Sting is actually a massive nerd: this song is in 5/4, happens to be track 6 on the album and is titled ‘Seven Days’. Who doesn’t love a number-based in-joke?

This is, in my opinion, one of the greatest songs ever written; a song in 5/4 that features extensive non-diatonic harmony, uses diminished passing chords in the chorus, contains a brief flirtation with the harmonic major scale and still sounds like a great pop song.

The verse groove provides a great training ground for 5/4 playing. The bass part consists of a simple, ascending root – 5th pattern throughout the verse, leaving plenty of space for you to count (and feel) the meter without having to play anything too complicated.

The chorus contains a rhythmic development of the verse part. Here, the bass uses a simple root-octave pattern to clearly outline the 5/4 meter’s 3+2 subdivision:

This brooding, organ-driven tune is built on a repetitive bass figure in 7/4, which can be thought of as alternating bars of 4/4 and 3/4. Notice how the rhythm of the initial idea is displaced and contracted to achieve the odd meter: 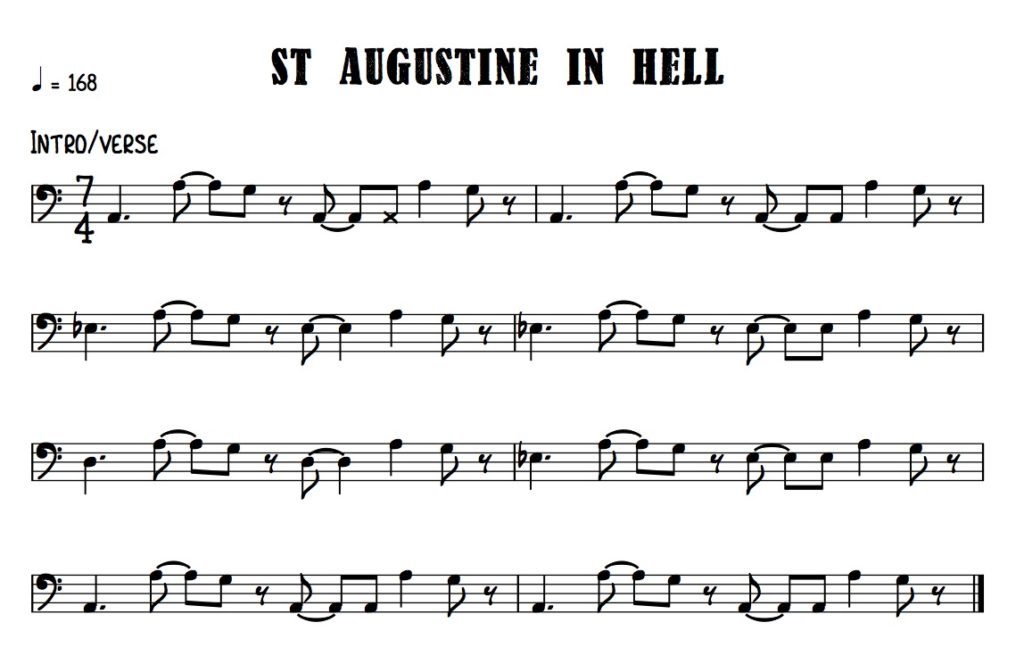 Love is Stronger Than Justice (The Munificent Seven)

Sting allegedly wanted to write a song in 7/4 and sought appropriate numerical lyrical inspiration from the 1960s Western film The Magnificent Seven (itself a cowboy twist on Kurosawa’s Seven Samurai), which also helps to explain the song’s country-influenced chorus. The verse groove is built on a bluesy idea that hints at A7, while Sting’s vamp under the piano solo (starting at around 4’11” on the track) features some more chromatic playing: 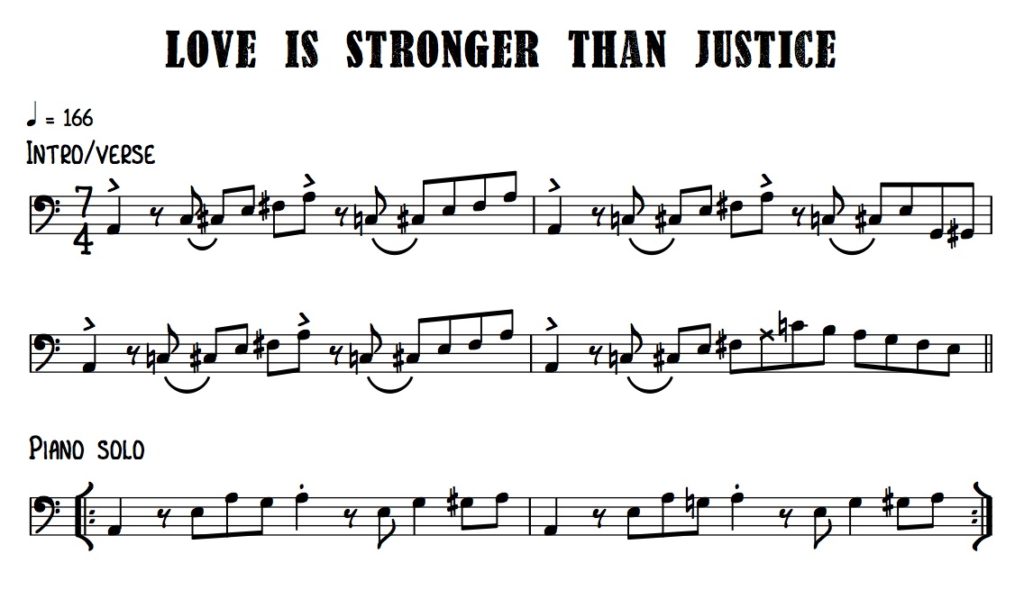