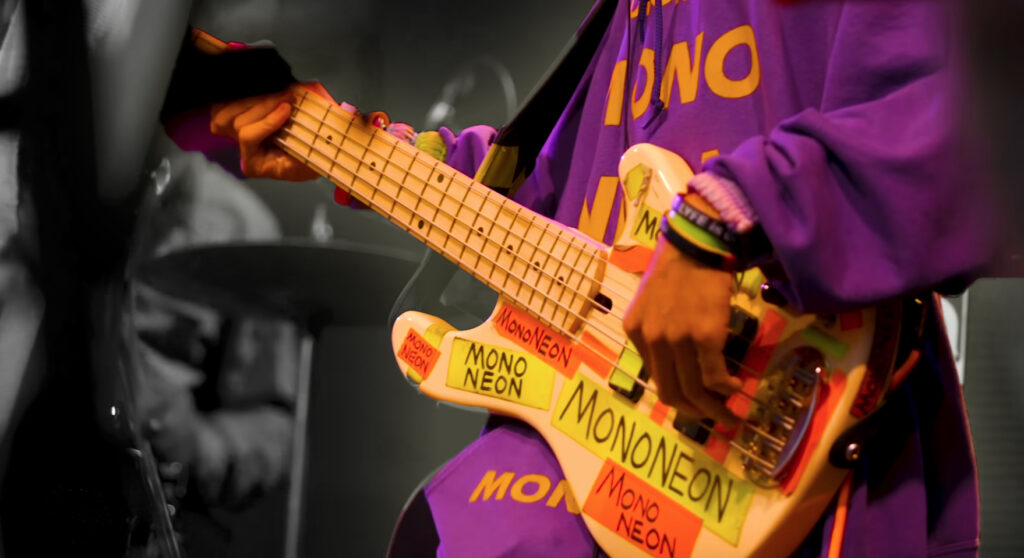 Ghost Note’s self-titled sophomore release was possibly the high point of 2018 for hipster musician-types; two members of Snarky Puppy and MonoNeon on the same record? It’s everything that the fusion world had been dreaming of.

For all of the band’s cutting-edge credentials, the album has a distinctly ‘retro’ feel; the cover art seems to channel Herbie Hancock’s 1970s output, with the music drawing heavily from the jazz-funk canon while adding influences from hip hop, Gospel, Latin, psychedelic and straight-ahead jazz. Regardless of the influences being showcased, there’s always one element at the forefront of the music: groove.

The album’s first instrumental track ‘Swagism’ is the perfect example of this musical melting pot; a balance between a simmering funk vamp and fiery, bebop-tinged unison lines.

The main bass groove is a straightforward four-bar pattern that outlines G#m (thinking of it this way rather than Ab saves us some enharmonic misery later on…). Notice the use of the tried-and-tested ‘question and answer’ compositional technique, seen here with two alternate endings:

As you might expect, articulation is integral to getting the bass line to, well, groove; it’s not just the notes themselves, it’s how you play them. My recommended tactic is to listen to the recording repeatedly in order to internalise where the accented notes are in the line and which notes are played using hammer-ons, as this has a huge impact on how the part sits with the other instruments.

The real reason for including ‘Swagism’ in this series is the monster unison lick that acts as musical ‘punctuation’ between the solos. Lines like this are an excellent resource for building your technique in a musical way; if you’ve spent any amount of time listening to (or even attempting to play) bebop heads and solos, then the language of this lick will feel familiar to you. Although on first listen you might feel like it’s just a barrage of random notes, analysing the line in the context of a familiar jazz chord progression allows us to see that it’s really just a series of chord tones, scale tones and chromatic approach notes, albeit played at high speed.

It’s important to break down lines like this into their most basic building blocks in order to help us understand them from a theoretical standpoint and to aid actually playing the damn things. Zooming out and seeing the ‘bigger picture’ shows us that we’re really just outlining three chords; not so bad after all, is it?

The harmony that I’ve used for this analysis is one of several possible interpretations, as there’s not much in the way of chordal support to give us context – there are other ways of breaking down the line and this may well not be how the composers think about it.

We start out by descending a B major 7 arpeggio; the rhythm is typical of figures played by jazz musicians from Charlie Parker onwards – this is something that I’ve also come across when transcribing solos from great improvisers like Bill Evans, Joe Henderson, Paul Desmond and Oscar Peterson. Using plucking-hand raking will make it much easier to get this opening phrase up to tempo. Chord tones are highlighted in blue, while scale tones are red:

From there, we move into outlining the next chord, G#m, via a series of approach notes:

Once we’ve ascended the G#m arpeggio, we’re able to resolve into the C#7 chord by using some chromatic approaches:

There is – of course – more than one way to play the line, and it’s worth experimenting in order to find the one that works best for you. Below is an alternative that keeps everything in one position on the fretboard:

This is the approach that I’d use if I were playing the entire saxophone lick; the last phrase is a good workout for your legato technique, as it will take some control to keep all of the notes at an equal volume:

Got A Favourite Groove?

If you know a groove that you feel deserves wider attention from the bass community then why not leave a comment below to tell everyone about it? Your suggestion might even make it into a future Groove Of The Week post!