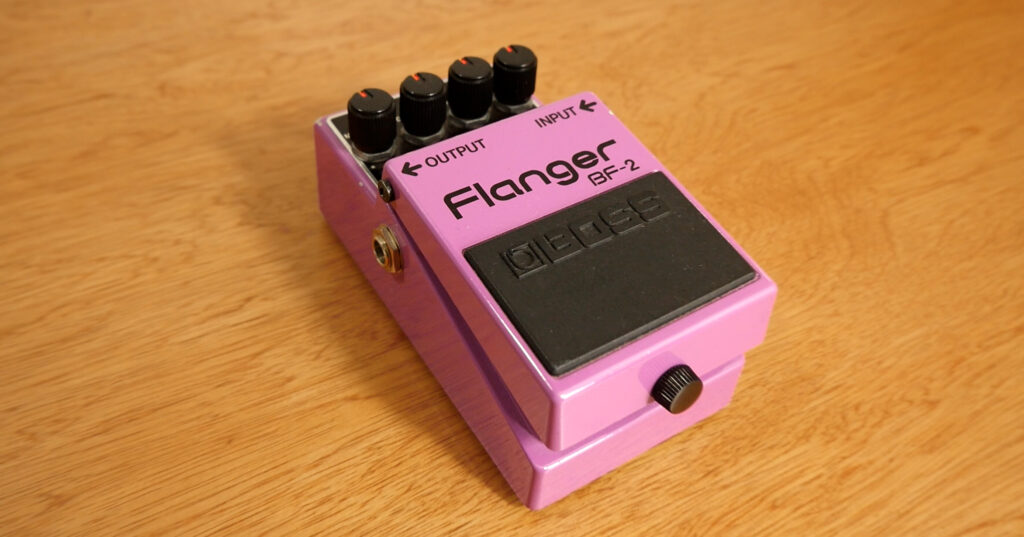 It’s a flanger. It, well, flanges things, you know? Flangers belong to the same family of modulation effects as chorus and phaser. The Boss BF-2 was produced by the company between 1981 and 2002, after which it was replaced by the BF-3 pedal which is still in production today.

What Does It Do?

The BF-2 creates the flanger effect by combining your original dry signal with a time-delayed copy of the signal, which is modulated by a low frequency oscillator (LFO for short). If that’s too technical, then the BF-2 is your ticket to a wonderful world of swirling, aeroplane-like sounds.

Famous bass lines that use a flanger which might serve as useful reference points include:

Why Would I Want One?

Because you’re in a Cure tribute band, or you grew up listening to grunge and can’t quite get that swirly guitar sound out of your head. Seriously, though, a flanger is a useful sonic colour to have at your disposal for those times when chorus is too tame and a phaser is too funky.

This depends on the year of manufacture; older Boss pedals were designed to run off a 12V supply (referred to as ‘ACA’), while the newer models run off a standard 9V supply (referred to as ‘PSA’). Check the information on the pedal’s back plate to be sure – some older pedals will also have a small sticker on the top of the pedal next to the power input informing you of the need for a 12V supply. As with other Boss pedals, there’s a 9V battery compartment accessible underneath the footswitch.

It’s worth noting that the BF-2’s controls allow it to produce a wide variety of tones; reducing the resonsance and bosoting depth can result in subtle, chorus-like tones, while maxing out the resonance can generate a distinctive ring modulator sound.

Where Does It Go In My Chain?

Modulation effects traditionally sit towards the end of a pedal chain, after octaves, envelope filters and fuzz/distortion. However, there are few hard and fast rules about pedalboard sequencing, so let your ears be your guide.

How Much Does It Cost?

As with many Boss pedals, the price that you pay will vary depending on the age of the pedal and the location where it was built; older MIJ pedals will command the highest price tags, but it’s worth mentioning that the internal components of the pedal didn’t change much during it’s production lifespan, so older doesn’t always mean better (or even different).

Broadly speaking, there are two main varieties of BF-2:

What Are The Alternatives?

There are a range of flanger pedals on the market to suit most budgets:

How Joe Dart Got His Groove