This transcription of ‘Funkify Your Life’ was the winning entry from the November 2018 Subscribers’ Request Competition, picked via the cutting-edge method I call ‘Bits of Paper in a Bowl’. 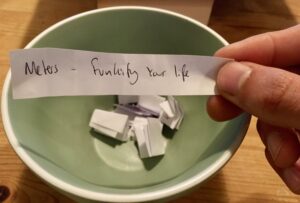 The Meters’ most famous cut, ‘Cissy Strut’ has featured on soundtracks (including Jackie Brown and Lock, Stock and Two Smoking Barrels) and remains a staple of jam nights across the globe. Taken from 1977’s New Directions, ‘Funkify Your Life’ actually shows the band sticking to the tried-and-true funk formula; syncopated basslines, minimal harmonic movement and a laid-back New Orleans ‘second line’ feel.

Every effort was made to capture exactly what George Porter Jr played during each section of the song, although I’ve avoided writing out all 5 minutes note-for-note. I can say with almost 100% certainty that the bass part for the recording was jammed rather than being read from a detailed chart, so this transcription provides an overall picture of the parts for the three different sections.

The Meters – ‘Funkify Your Life’ Transcription

The track begins by showcasing an unaccompanied George Porter Jr in all his glory. During the first four bars it can be tricky to get a definitive answer about exactly where the one is, and the syncopated accents of the riff don’t make things any easier. Note the use of hammer-ons from open strings in bar 1; it’s worth experimenting with different combinations of fretted and open string A notes throughout the tune in order to make certain phrases easier to play.

The bulk of ‘Funkify Your Life’ is built on a repeated 2-bar groove that outlines Am7 and features numerous variations derived from the A minor pentatonic scale. While the main line is harmonically static, there’s plenty of rhythmic activity; the use of ghost notes provides the part with an almost constant 16th-note rhythm, and the accent on the last 16th-note of the first bar of each phrase prevents the tune from lapsing into generic funk territory.

During the bridge sections (bars 28-35 and 41-52), ‘Funkify Your Life’ follows the James Brown school of funk composition and moves to the IV chord. As with the main groove, the bridges are built on a 2-bar phrase; bridge 1 features a chromatic figure that becomes a common disco bass cliché when played in octaves, while bridge 2 incorporates a series of syncopated popped notes.

At many points on the recording, it’s hard to tell whether the bass is played fingerstyle or slapped. The tone during the introduction suggests a Precision bass with roundwound strings played with a great deal of commitment and conviction — there’s definitely no string tickling going on here! The bridge sections (bars 28-35 and 41-52) feature some popped notes, but it’s unclear as to whether the 16th-notes on beat 1 of each 2-bar phrase are slapped or hard plucked.