Before we talk about the ins and outs of Don’t Stop, I’m going to stop talking about the ins and outs of transcriptions altogether, and share a random Fleetwood Mac-related anecdote. I was once in the pit band for a theatre show in Kensington that included an 8am band call – en route to this absurdly early engagement I stopped into a Starbucks (there were no genuine coffee establishments open and I was desperate…) and in front of me in the queue was an older gentleman sporting long grey hair and double denim.

Noticing my case, he asked ‘what sort of bass is inside?’ – I was slightly taken aback at not having to provide the usual explanation necessary for curious members of the general public (‘it’s a bass, sir, like a big guitar’…) and enthused about my Precision Bass. He then said ‘Do you know Fleetwood Mac? They’re playing The Albert Hall tonight. I’m John McVie’s bass tech, have some plectrums.’ 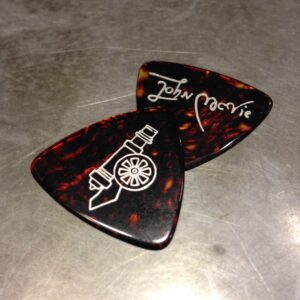 What I should have done at this point is ask if I could come and hear soundcheck, but in my caffeine-starved state all I managed to do was mumble some words of gratitude and grab my latté.

So, maybe Starbucks is worth going to after all (not for the “coffee”, obviously, which always tastes like burnt hair).

The tune in question appears on Fleetwood Mac’s most revered release, 1977’s Rumours, which is probably in the record collection of everyone you know (it’s sold roughly 20 gazillion copies to date) and regularly appears near the top of every publication’s ‘Top Albums Of All Time’ list. ‘Don’t Stop’ is a straightforward shuffle blues affair, with everything sitting nicely in one position and no real variation for the duration of the song – just make sure that you don’t miss the stop in the last chorus if you’re gigging this.