Following on from last week’s double stop adventures with Hiatus Kaiyote, it’s time for another contemporary chordal groove. This edition of Groove of The Week comes courtesy of modern bass master Damian Erskine (his uncle is the Peter Erskine) and provides one hell of a workout for both hands:

As with many of the grooves that underpin Damian’s debut album (2010’s ‘So To Speak’), the introduction to ‘Kaluanui’ showcases his incredible command of rhythmic ideas and dynamic contrast. In between each chordal flourish is a series of of ghost notes that act as an additional percussion instrument, giving the line a sense of perpetual motion and augmenting the groove without overcrowding the harmonic content. 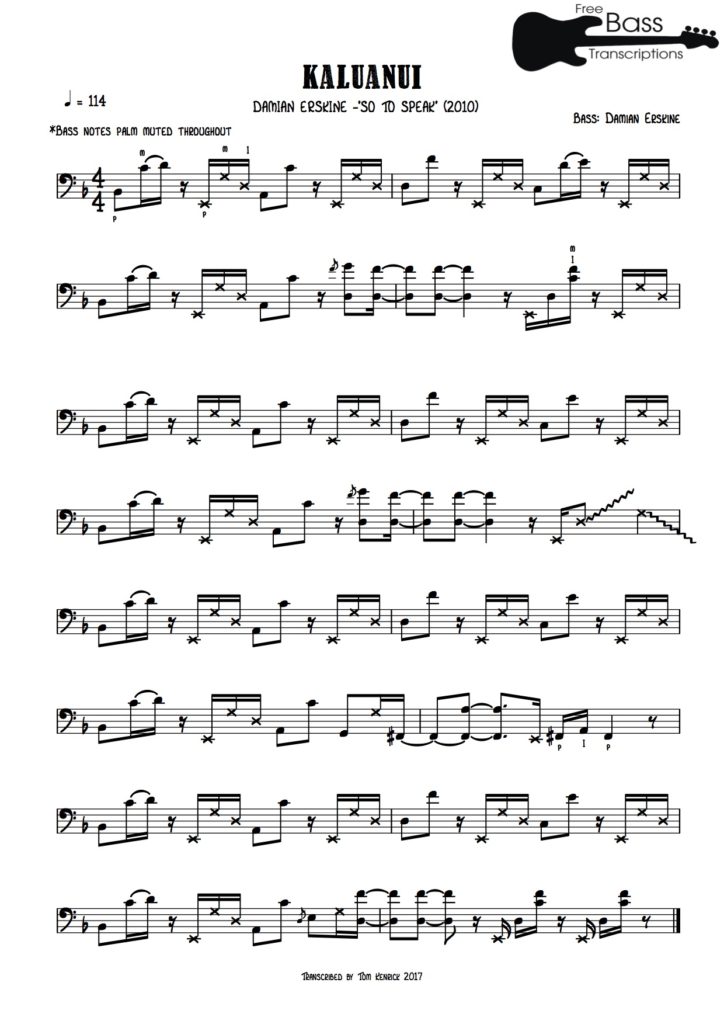 Speaking of the harmonic content, the groove sits predominantly in F major, using double stop 10ths to imply Bb major, A minor, D minor and C major. On the third iteration of the line there’s a brief departure to a new tonality with the arrival of a D/F# chord.

As far as the left hand is concerned, I fret all the major 10ths with 2nd and 4th fingers, while minor 10ths are covered by 1st and 2nd fingers (or 1st, 2nd and 3rd fingers in the case of the D minor chord shape that appears in bars 4 and 16).

10ths are a great way of conveying chordal sounds in a ‘shorthand’ fashion and a useful addition to any bassist’s toolkit as they tend to ‘speak’ more clearly than more densely populated chords. Notice how some of the major chords feature a hammer-on from the 9th into the 10th, which is a great way to add melodic interest to an otherwise chordal line.

As far as the right hand goes, ‘Kaluanui’ is a great groove to use as a developmental tool for your palm muting skills – I’ve used the classical guitar system for naming the plucking fingers (p=thumb, i=index finger, m=middle finger). It might take a while for the p,m,i motion required to execute the ghost notes to feel comfortable, but once you’ve mastered it then it’s great way to add a percolating percussive element to your bass parts where appropriate; it’s no surprise to learn that Damian Erskine started out his musical career as a drummer, switching to bass once he was at the Berklee College of Music – lots of his grooves feel like they were composed from a ‘rhythm first’ perspective.

For a deeper insight into Damian’s highly evolved right hand technique, take a look at his book Right Hand Drive.